After making it across the French Alps in blizzard conditions we have popped out the other side into a very hot and dry Italy.

The trusty car tootled up the Alpine Cols at a speed that would almost put a”G-Whizz” car to shame. We even had to come down les Alps d’Huez in first gear. Unfortunately the view of Mont Blanc and the whole the Alps, from the top of Col d’Iseran, was obliterated by cloud. At the Col du Petit Sant Bernard we visited a delightful Botanical Alpine garden, although most of it was covered in snow I had lots of fun finding the flowers that were in bloom and Gavin just got cold. 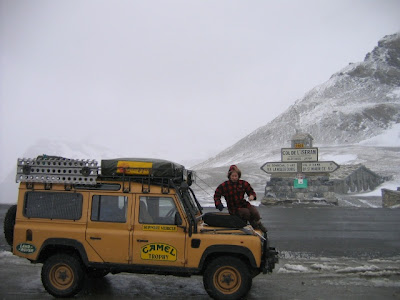 Nearly blowing away at the top of the Col de L'Iseran

The difference once we started to descend into Italy was marked. Suddenly all the snow was gone and my toes began to warm up. Before long we had to stop to change out of our winter thermals. From the Italian Alps it was long way down to the Po valley, passing vineyards, rice fields, maize crops, ancient castles and being passed by crazy drivers.

In Piacenza we met up with friends of Granny Annie, Isabella and Fulvio. They took us to their summer house in the hills south of Magnano feeding us with fruit and Fulvio’s refreshingly sweet sparkling white wine. He is particularly proud that he produces wine that is 15% alcohol rather than the more traditional 12.5%. After showing us their archaeological remains, Fulvio excavated, underneath the house we were taken to lunch at a local Bar. Imagine Gavin’s surprise when after a big plate of pasta with bolognese sauce he was asked what sort of meat he would like for his main course. We surely ate well. 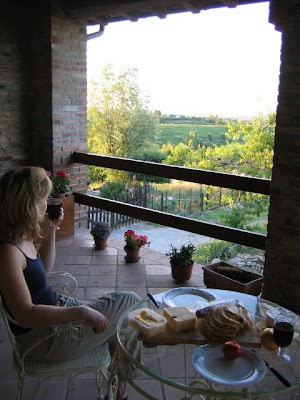 View from the terrasse in Magnano

After a beautiful night camping in the Magnano hills- we even used the solar shower for the first time, it was delicious, we made an early start for Venice. 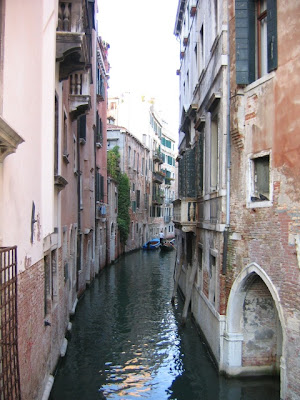 What a magnificent city. I do not really think that I should try to describe it. Yes there were hoards of tourist and we did do our usual thing of eating and drinking our way round the city, but there was so much to explore and turn a corner and all the other tourists have disappeared. Also, in my heart of heart I did in truth want to dress up in a stupendous 18th Century gown, don a terribly ornate mask and make my way in a Gondola to a masked ball. I think Gavin thought it was all a bit too hot for such a carry on.

Gavin has just made friends with the Australian owner of the campsite and the All Blacks vs South Africa are playing. So once we have finished watching the All Blacks win we will be off, back to the Alps direction Austria.

36 hours with no rain

Yes we did have 36 hours with no rain but it is raining again in the French Alps. However, it is warmer- so warm that the car has been trying to overheat going up some of the Cols- such as Col du Menee. 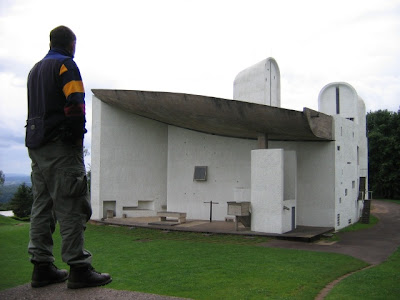 Our visit to La Chapelle Notre Dame du Haut in Ronchamp, designed by Le Corbusier in the 1950's, was inspired by Gavin's sister's namesake, Claire (from Auckland). The Chapel is quite unlike any church I have visited before and found it to be exceedingly peaceful. 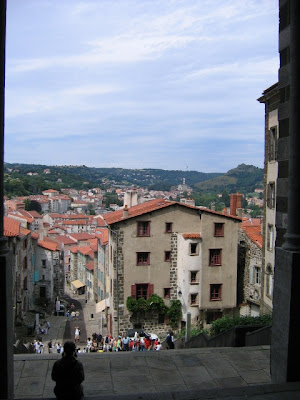 The Ballon des Vosges I understand affords wonderful views across to the Alps- alas we barely saw the other side of the valley. Yesterday we visited a quirky town in the middle of the Massif Centrale, Le Puy en Velay. The town is surrounded by the remains of 60 extinct volcanoes and has churches and statues on all different high rocky outcrops. 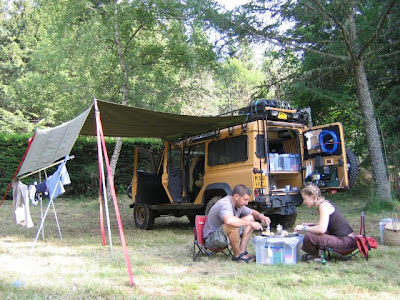 Table for two in Massif Central

Now we head on to L' Alpe d'Huez and Gavin's nemesis (although he did actually conquer it on a mountain bike) the Col du Galibier. Sadly we are too early for the Tour de France this year. From there on to Italy.
Posted by Catkin at 10:19 6 comments: