Well, here we are, STILL in Egypt. Our planned voyage along Lake Nasser from Aswan in Egypt to Wadi Halfa in Sudan has been delayed by a week due to circumstances beyond our control.

After spending four days at the Rezeiky Camp in Luxor, relaxing in the shade, swimming in the pool and catching up with maintenance on the Land Rover, we bade our farewells and headed south. Only for a few kilometres though, as we were soon stopped at the police checkpoint. All tourists travelling to Aswan have to travel in one of three daily convoys, with police escorts front and rear. We were travelling with another overlander, Louis the Dutchman, who had also been staying at the camp in Luxor. He is a seasoned expert, as he travels through Egypt every year to spend a few months in Africa. He had hoped that our two vehicles might be able to travel on our own, but the police were having none of it. Louis is quite forthright, and has no hesitation in telling the police what he thinks of their stupid rules, half in Dutch, half in English.

Unfortunately, when pulling to the side of the road at the checkpoint, our left rear tyre had an altercation with the checkpoint’s set of roadspikes that they had conveniently hidden behind a barrier. Luckily none went fully into the tyre, but we still got another puncture from it. Much to my joy I got more practise at removing the tyre and mending the puncture. Luckily the tyre is still useable, because it is one of our best.

We finally did get going in convoy, but that only lasted about five minutes of the 220km journey. The bus and two vans took off at high speed with the lead police vehicle, never to be seen again, while Louis and ourselves trundled along at our usual 80km/h, despite the tail car urging us to step on it. Catkin had been looking forward to the “convoy”, and even had the song of the same name playing on the ipod, but the end result was a bit disappointing. 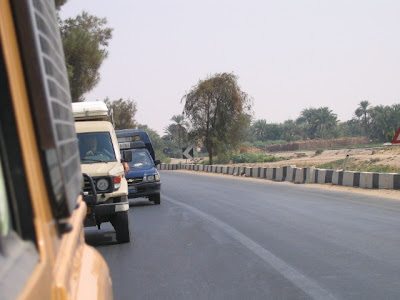 Louis pointed out all the important places in Aswan on arrival, and we then headed out of town and across the Nile to spend the night in the desert. Next day (Sunday) it was off to the Nile Navigation Co office to book tickets for the ferry. Outside, we met Louis, along with two Dutch motorcyclists Luuk and Guido, who had also been staying at Rezeiky Camp in Luxor while we were there. They had already been into the office, and told us that the company won’t sell the tickets until all traffic police formalities have been finalised. So, off to the first traffic police office we all drive (a better convoy this time), but because of the Eid-El-Fitr holiday for the end of Ramadan it’s closed until Tuesday. We decide to try the second Traffic Police office on the off-chance that it might be open, but it’s not. The news is all bad. The ferry will leave on Monday as scheduled (a miracle in itself), but we won’t be on it (typical). So now we’re spending a week in and around Aswan. 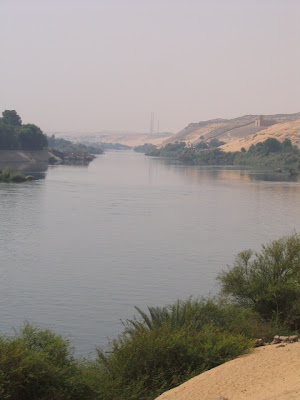 The day before we left Luxor, our new friends from France, JF and family, caught up to us again, so it was good to see them and hear where they had been since our brief reunion in Cairo. Of course, we touched on the subject of the rugby, but only briefly. They also very kindly took us out for dinner in Luxor that night. It looks like they might catch up to us again now!

On Tuesday we managed to satisfy all the necessary traffic police requirements and handed back our temporary number plates and driver’s licence. We have booked 2nd class passage on the ferry for ourselves and a space on the barge for the Camel (cars travel separately and take an extra day). We head back to the Nile Navigation Office tomorrow (Sunday) at 9am to complete ticketing and hand over the cash (about 3000 Egyptian Pounds all up), before driving to the harbour to pass through customs and load the vehicles on the barge. We then have one more night in Aswan before the ferry leaves on Monday. The journey is overnight, passing the great temple of Abu Simbel on the way, and we should arrive in Wadi Halfa on Tuesday morning. The car probably won’t get there until Wednesday, and then might take a day or two to unload and get through Sudanese Customs… 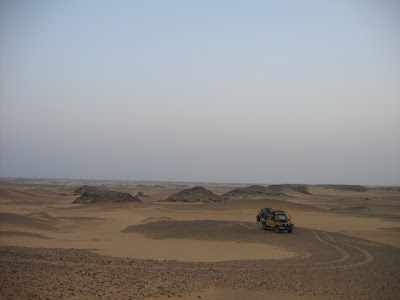 After spending most of the last week camping out of town in the desert, we are again treating ourselves, spending our last three nights on land in Egypt in an hotel. We have a nice little room next to Louis, Luuk and Guido’s rooms, and it’s been good to get properly clean, do some washing etc. The hotel has a restaurant, but they only serve soft drinks and eggs (either boiled or omelette, for breakfast), so last night Catkin cooked a delicious meal of pasta, aubergine and sausage out on our tiny balcony. 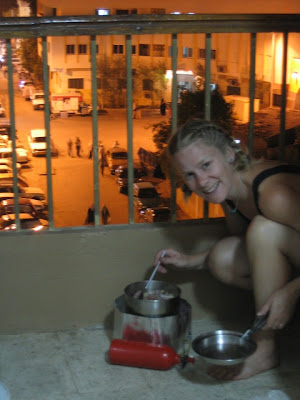 We have a pretty good view of the Nile from the balcony, too, where we can watch the feluccas run up and down the river. 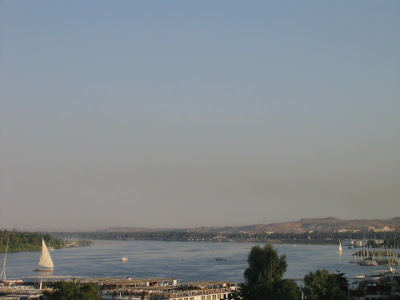 By the time we reach Sudan, it will have taken two full months to travel through Syria, Jordan and Egypt, which by my reckoning is about twice as long as it needed. It feels a bit like we have been getting nowhere. Hopefully things will pick up from here. During our ferry trip we will cross the Tropic of Cancer, and from there it’s only another 23½ degrees of latitude until the Equator! As of today, we have been on the road for 118 days.

And no, no Massey Fergusons sighted in Egypt.