Catkin forgot to mention the dressing down she gave an unsuspecting local while we waited for the river to recede on our way into Sossusvlei.

One of the first things we had noticed when we arrived at the entrance gate was the set of recycling bins which had been installed by Raleigh International a few years earlier. We had seen a lot of broken glass on our travels, so thought this was an excellent idea. 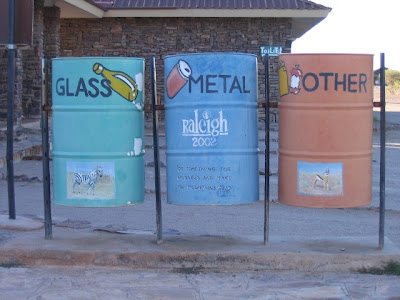 Anyone who knows Catkin well knows that one of her pet hates is litter, and she never misses an opportunity to try an educate anyone she sees committing the dreadful act. Well, this guy had driven up in his ute to join his mate from Namibian Wildlife Resorts (who run the show) and have a look at the river. After he had finished the bottle of beer he was drinking he casually lobbed it into the water without a second thought. I don’t think he will do it again in a hurry. His only attempt at an excuse was “There was nowhere to put it…” He looked very sheepish.

As Catkin said in the last entry, Sossusvlei was spectacular, made even more so by having the whole place to ourselves. 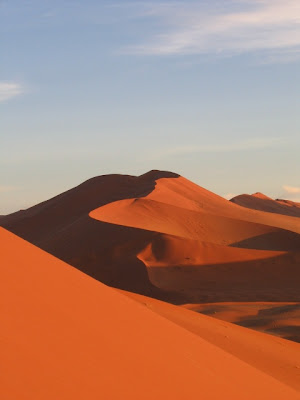 After Luderitz we visited the Garub feral horse view point, where we spent the evening watching groups of horses come to drink. You'll have to look pretty hard to see any in the photo though. 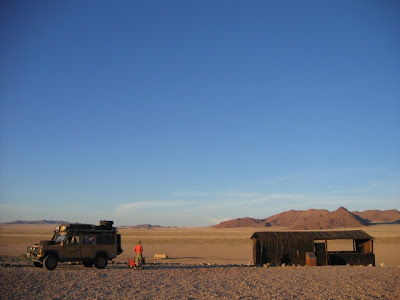 Further east the next day we called in to Keetmanshoop to fill up with diesel and stock up on groceries. When we had been in Walvis Bay a couple of weeks earlier, an English gent had come up to talk to us about Land Rovers. He has a Land Rover garage in Sussex, although he now lives in Namibia. He gave us the name and details of the mechanic based near Keetmanshoop that he uses, highly recommending his services. Seeing as we were passing through, we thought we would try and find him. Shortly we were heading down a rough road until about 60km out of town we found what we were looking for – “Steinfeld - Johan Strauss.” We still weren’t sure that this was the right place, although the immaculately presented Land Rover parked under the tree outside the house gave us a glimmer of hope. Around the back of the house, however, it was Land Rovers everywhere, Quite a few in parts, some completely written off and many mid-restoration. He has to be the most knowledgeable Land Rover man we have ever met. We spent ages talking to him and his wife Ina about our trip and the repairs we have made. He gave us lots of advice, and was able to demonstrate on old parts what to watch out for. We considered getting him to recondition our noisy gearbox, but these things don’t come cheap so we are still hoping it will get us to New Zealand as it is. We camped on their farm that night, and after taking up even more of his time the next morning finally bade them farewell. He even managed to find in his stores the fuel line we had been unable to track down in all of Windhoek. Catkin felt justified in her claim that we have had exceptional bad luck when he admitted that he had never seen a transfer lever become disconnected as had happened to us in Kenya. Overall, our Steinfeld experience was inspirational and well worth the detour to get there. Catkin thinks the two of them should be declared Namibian National Treasures.

We had intended to go into Fish River Canyon, but when we arrived at the gate we found out that the entry fees were twice what we had expected. We were down to our last few Namibian dollars, so decided to give it a miss in this instance. Maybe next time.

From there it was only a short journey to the Orange River which forms the border with South Africa. We met a motorcyclist from Manchester on a Triumph at the border. He had left the UK in October, and it sounded like he had spent ages pushing his bike through the mud. He seemed well and truly over it and was looking forward to getting to Cape Town and then back home.

On our arrival in Springbok the other day, we were driving around trying to sort out a few things we needed to change the oil in the transfer box. We were shown true South African hospitality when Nico from Springbok Motor Rewinders let me park up in front of his workshop to do the oil change, got one of his workers to bring me a sheet of cardboard to lie on and some rags, and even took care of the waste oil. It was incredible and we were very grateful.

Now we’re awaiting the arrival of our friend Ianthe who is coming up on the bus from Cape Town to join us for a week or so. She will be our first visitor, so we have been practising our manners. No more burping after dinner, Catkin. Hopefully she doesn’t think we have turned a bit weird having just our own company for the last eight months.

Today is our 241st day on the road since leaving London on the 25th of June last year. We have covered about 40,000km so far, yet we are only just over 9000km from London as the crow flies. The distance (as the crow flies) to Queenstown, New Zealand is about 11,200km, although that is via Antarctica, and I don’t imagine many crows fly that far south. Not too many Land Rovers make it to the South Pole either, but don’t think we haven’t considered it. As Catkin mentioned, we are now out of the Tropics, and we seem to have made it safely through without contracting Malaria. We have changed the engine oil five times and I’ve had six haircuts, courtesy of Catkin. And we still haven’t made it to Cape Town yet!

Not many photos lately, so I’ve included this one from Jordan. 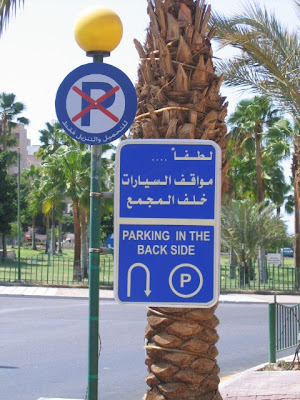