Hurrah, we are finally in Queenstown and Gavin’s promises of magnificent spring weather, as opposed to the rain in the north, turned out to be a complete load of tosh as we battled through blizzards yesterday. Today it is still FREEZING. It is still pretty good to be here.

Despite the threat of a rough crossing across the Cook Straight last week we were very lucky and barely experienced any swell. It was lovely to drift in through Queen Charlotte Sound to Picton, on a ferry which I think in a previous life served the folk of Sicily across the Mediterranean. The evening drive along the Kaikoura coastline was spectacular with the sun setting over the snow capped mountains. We saw plenty of seals but no whales or dolphins. With the trailer even more heavily loaded than when we left Warkworth we made slow progress and did not arrive at Gavin’s sister's until quite late. 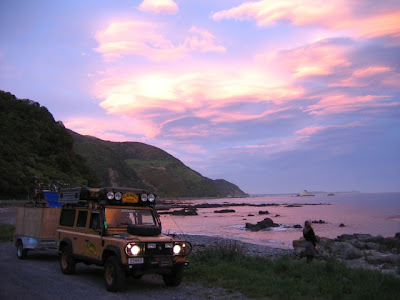 The next few days were spent catching up with friends and family whilst running various errands around Christchurch. Then, just when we all thought Gavin’s “manly” days were over he had to mend another puncture, but this time it was much more simple- it was only his mountain bike tyre.

While in Christchurch we were treated to a tour of the cardboard packaging plant where Gavin's sister Danielle works. A few of her colleagues had been following the blog, and we felt a bit like celebrities when we were introduced to people for the first time and they already knew our names.

Then it was time to cram even more boxes and gear into and onto both the car and the trailer. By now we were carrying six bicycles, plus a bike frame, two beds, plus their mattresses, two bar stools, one chair, many many tea chests, all our expedition gear and a strawberry plant. We made very slow progress up Burke Pass, but it was another stunning day and the views across Lake Pukaki to Mount Cook made it all worthwhile. 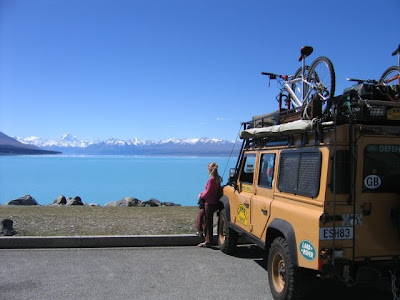 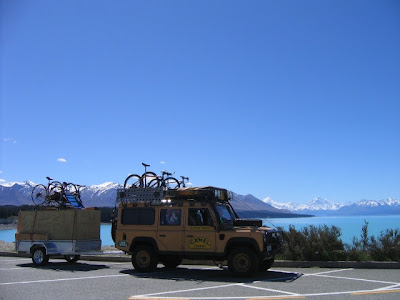 We stopped for a bit of a photo shoot but we still had a long way to go and carried on our merry way to view our section at Lake Ohau, just a 40 minute detour, and to ceremonially chop down the first tree. Gavin has been designing a house to put on the section since early on in Africa so it was exciting to be able to visualise it all a bit better. 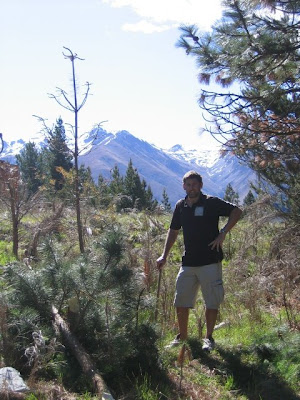 Time to get going again, we still had the Lindis Pass to negotiate and were a number of hours from Queenstown. We were keen to arrive before dark, just in case there was a problem with the re-connection of electricity and gas etc. Finally after a journey that took nearly twice as long as normal we arrived at our little house overlooking the Remarkables and Lake Wakatipu.

The house has been rented for a number of years and there are few alterations and repairs to be completed before we take all of our possessions out of storage, so we are still “camping” in a fashion but this time it is in a house. Gavin has to decide on his career direction from here and we are both planning for the arrival of the Little One in January. So it is all very exciting for us still.

After almost two years of having no fixed abode it was good to be home. Although it does mean the end of the Camelriders2007 and the last part of the journey was very rushed, not the final tour of New Zealand we had anticipated, but we have had a fantastic run. We have both had a lot of fun writing the blog and are really pleased that so many people enjoyed reading it. It felt very reassuring to know that you were coming along the journey with us and were interested in our antics, adventures, trials and tribulations and the friends we have made along the way. We would also like to say a massive THANK YOU to all and everyone who has shown us hospitality, given us assistance and provided logistical support along the way.

Thank you again and our door in Queenstown is always open, I am a long way from my original home now and we love having visitors.

P.S. You can contact me on Facebook, but not Gavin because he has never looked at it. 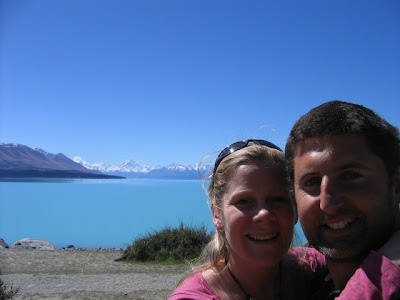