A place with a name like Coober Pedy certainly had us intrigued and after learning that most of the living is done underground we decided to visit, it was even on our way. One teenage lad had told us that the town was really spectacular and although we learned a long time ago not to set too much store by other people’s impressions, we came away with a decidedly different impression. The town really is rather bizarre. The locals are very proudly displaying recent photos taken of the surface of Mars and comparing them to photos of their beloved town. We had to agree that they are very similar, except that Coober Pedy is probably a bit more dusty. The town is the centre of the Opal mining industry and every other premises is either an old mine museum or Opal shop. The original pioneers and miners decided that the environment was a little too hot for them and being miners burrowed underground to live and today many of these dwellings house commercial premises and hotels. It was lovely to go down into the cave like rooms, they must have been a real sanctuary from the wind, dust and heat. 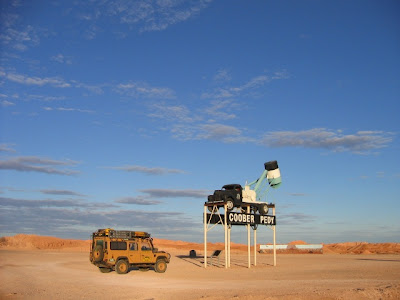 Dotted all round the town are many small private mining ventures and there are numerous signs warning of the potential dangers. 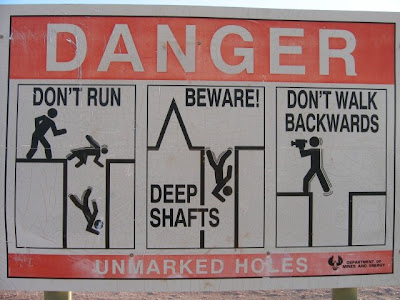 After the usual fuel and water top up we took a road eastwards to William Creek to meet up with the Oodnadatta track. For the first time on the whole trip we had to pay for the water which is dispensed from a coin operated machine. Water is fairly precious in these parts, although it did only cost a few cents.

We were by now rather wary of gravel roads but were very pleasantly surprised. This one was almost, not quite, as smooth as a baby’s bottom. What a delight. The road itself was also a lot more interesting than the Tanami track. The next day we expected that on meeting up with the Oodnadatta track we would again be met by huge corrugations, but again the road was good. In fact none of the roads we have travelled on since have been nearly as bad as we feared. What a bonus.

The Oodnadatta track follows part of the route of the Old Ghan Railway, which travelled from Adelaide to Darwin. All along the part we travelled were a number of sidings and homesteads some in a completely ruined state and some restored. One even hosts a ball on alternate years. We encountered a sandstorm in the afternoon so I hope the ball is scheduled for a different season. We also drove through the world’s largest cattle station, Anna Creek, which is larger than Belgium. We did not see a single cow. 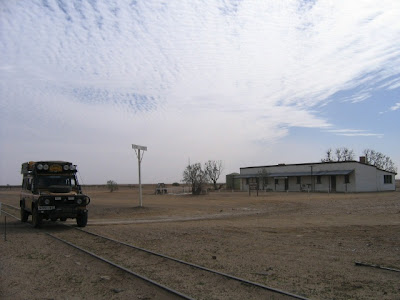 We stopped for a few drops of fuel in Leigh Creek before heading into the North Flinders Ranges. Leigh Creek is a modern mining town which has been fully landscaped and planned with all sorts of modern amenities (no bare patches of dust for the wind to agitate which gets into your nooks and crannies). It formed such a juxtaposition with the harsh environment and very different to the old fashioned homesteads and roadhouses we had passed.

That evening we found a site to camp which we hoped would provide us with enough shelter from the wind, also rain was looking imminent. Usually we find that the wind dies down when the sun sets, but not on this occasion so it was pitch black by the time we made camp. Few hours later the wind decided to change direction and it sounded as if our tent would be torn to shreds. Gavin got up to see if he find could somewhere a bit more sheltered and before long I felt the whole car moving underneath me. It was rather cool, I felt a bit like the Queen of Sheba being transported around but I did get up also because when the tent is erected the driver is unable to see anything. Eventually we were settled in a more sheltered spot and spent the rest of the night quite peacefully.

The following day we were keen to explore the mountains on foot but it was still so windy that all the dust in the dry river courses was just swirling everywhere and it was in fact really unpleasant so we stayed in the car and carried on driving. That evening we joined up with the Strzelecki Track and camped at a hot springs nestled between low sand dunes. It was still windy. The following morning it was still so Gavin set about repairing another puncture and a few other repairs. One of our oldest tyres really has had it but we are determined to get the last few miles out of it- especially as we are still on gravel roads and not travelling very fast. I enjoyed the luxury of washing my hair with HOT water and attending to some laundry.

Despite the ever present wind becoming even stronger as the day progressed we decided to spend the rest of the day hiding from the wind and having a bit of a break from travelling. The next day we were on the road again, not really bright and early because it really is pretty cold in the mornings, and arrived in Innamincka. The route took us past the Moomba gas fields and we were intrigued to see signs for various camps and then saw just a few containers. The odd container had a satellite dish and one had a sign on it “Hotel California”. These were the accommodation blocks for the mining workers- a few containers dumped in the desert, most congenial living quarters. We understand that the workers are paid very well. Although we were still in the desert there was evidence of recent rains as we drove past swathes of yellow, white and purple flowers. 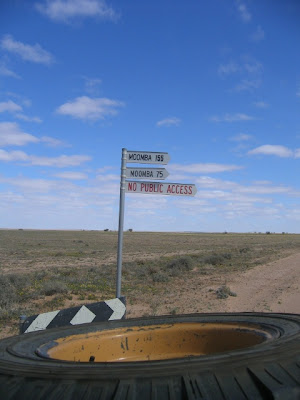 That evening we were driving on tar seal. This has good and bad points. The worst thing is that it is only a single track of tar seal so in the event of meeting a road train or a road train wanting to overtake we have to pull right off the road. Two normal vehicles travelling in opposite directions both pull off half way onto the gravel which is great when a stone flicks up from the other vehicle and chips your windscreen.

It seemed that quite rapidly the scenery was changing from desertscape to pastoral countryside and the following morning we awoke to the scent of camomile pasture and the stares of an inquisitive neighbour of the bovine variety. Now it seemed that the wind had abated, after a week, and rain was imminent.

That evening the rain started and did not cease for days. In the morning we stopped at a picnic area when a chap originally from Devon pulled up in his land rover and thus ensued another of many landy conversations. He was also very proud of his beast which was preserved for real off-road adventures, so I think he was bit put out when another chap pulled up in his car towing a caravan and exclaimed that had he known that this big yellow land rover (us of course) was just down the road he would have come and asked us for a tow rather than going to the local garage, without even glancing at the Devonians land rover.

As we carried on our way we were coming across towns every two or three hundred kilometres, towns which were also incrementally increasing in size as the price of fuel was decreasing. We drove through the heart of the Australian cotton growing industry with large dams attached to towns. These dams provided the towns with lovely waterfront parks and although the ecological effect of these dams on the river systems downstream is highly controversial there is no denying the beautifying effect they have on these cotton towns.

Bush camping becomes more and more difficult as the roads become busier and the population density increases so when we heard about a rural pub which encourages bush camping on its common that was almost on our way we could not pass up the opportunity of a draft beer without having to drive or make camp. We arrived at the pub and very welcoming it looked however, with all the rain we had just encountered our potential camping area looked less than inviting. MUD. As we were surveying the scene a chap waved to us indicating to go no further. He gingerly picked his way through the mud over to us, followed by another chap caked from head to foot on his left side with mud. He explained that there were a number of vehicles all bogged down and were waiting for a tractor to come and pull them out. Okay, so we gave that area a miss and carefully made our way over to another to survey and almost got stuck ourselves and decided to give the whole thing a miss. We eventually found a campsite much later after dark by an agricultural railway depot which amazingly even provided hot showers. There were only two houses there and nothing else. 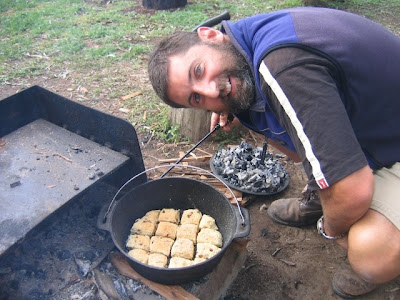 As we got closer to the coast we stayed in a couple of really delightful National Parks campsites, they even provided firewood (wet) which gave Gavin the opportunity of baking scones. In a delightful rural area we called in to visit Virgil, a friend of Gavin’s, and his new family. He and all his extended family-in-law made us very welcome and it was lovely to sit round a family dining table again.

Our time in Australia is coming to an end so we are spending our last week on the road exploring the area north of Brisbane which is very pretty, lush and hilly. Yesterday we passed through Gympie, an attractive old railway town on our way to the Great Sandy National Park. Last night we camped on the beach, nestled in the sand dunes, after driving a few kilometres along the beach, cutting it a bit thin as high tide was nigh. 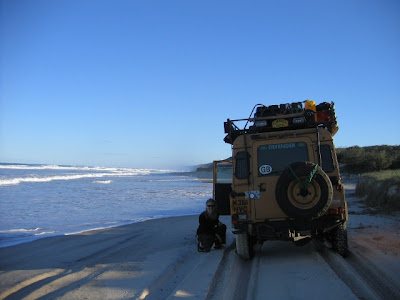 Finally, before I go, very happy 25th birthday to Kathryn.
Posted by Catkin at 07:07 3 comments: