Firstly, Happy New Year. We had a good but very wet New Year’s Eve, but more about that later.

Lilongwe was our opportunity to stock up on fuel and groceries in preparation for our assault on the border and invasion of Zambia. We stayed at another very comfortable campsite, well set up for overlanders like ourselves. In fact Peter and Sabina, the Austrian couple in the truck that we met at Chinteche Inn, were still there despite the fact that they had been heading to Mozambique when we last saw them. When we left they were still there…

So from there to the border. We had some confusion when, after thinking that we had completed Zambian customs and immigration, some guy with a nice umbrella refused to let us through the gate out of the compound. It turned out that the customs official I had dealt with had forgotten to charge us the (recently imposed) 150,000 Kwacha carbon tax, so once that was taken care of we were free to go. It turned out that the man with the umbrella was their security guard, although you wouldn’t know it to look at him. In a moment of brilliance, the officials suggested that they might try to get him to wear his proper uniform in future so that he would be more easily identified. Good idea.

It was New Year’s Eve, and we were aiming to make it to Flatdogs Camp, near the entrance to the South Luangwa National Park (thanks to Riggsy and Bainsy for the top tip), and just on sun set we finally made it, finding a nice spot under the trees. 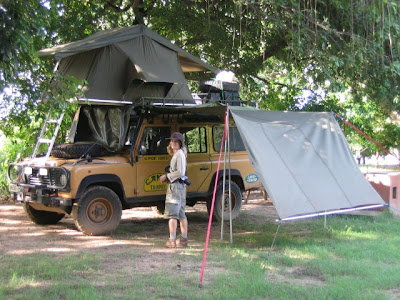 The park is renowned as a great place for game spotting, including hippos, giraffes, zebras, elephants, baboons, lots of different antelopes, lions and leopards, and many species of birds. Sure enough, even on the track into the campsite we had to stop and wait for some elephants to move past, and they were roaming around the campsite while we were there as well. In fact, the security guards insist on escorting you if walk around at night just in case you happen to interrupt a hungry hippo having a midnight snack. 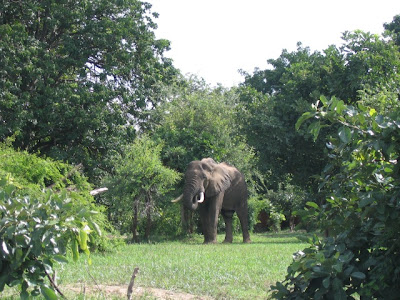 Flatdogs had the local New Year’s Eve party, and we were invited. We got to meet a few of the locals working in the tourism industry, and it was interesting to hear about their life in Zambia. Luckily, another guest brought their ipod along for some sounds, and yes, Africa by Toto was on it (as well as the Minder theme… who has that on their ipod?!). There was a big countdown for midnight, but I think Catkin was disappointed at the options for New Year’s snogs. Soon after midnight the rain started, and only got heavier and heavier. The courtyard outside the bar slowly filled up until we eventually had to make a dash for it back to the Land Rover and into our very dry and cosy roof tent.

New Year’s Day was spent relaxing in the campsite. In the afternoon we went for a walk along the riverbank and saw loads of hippos (chortling away to themselves), and then as the sun set a family of giraffes came and loped along the opposite bank. 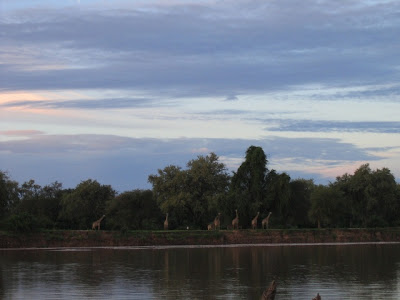 The next day we took the Land Rover for morning and afternoon game drives, for a few hours each time. The roads were very wet and muddy, but we managed to keep it all together and not get stuck. We saw loads of wildlife, only missing out on the elusive leopard. At one point we were watching three elephants, including one baby, walking along when they came to a stream. We saw the two big elephants cross, but lost sight of the baby, until eventually it reappeared from behind its mother, completely soaked. The water mark on the mother was higher than the baby elephant, so we can only assume that it waded through using its trunk as a snorkel. 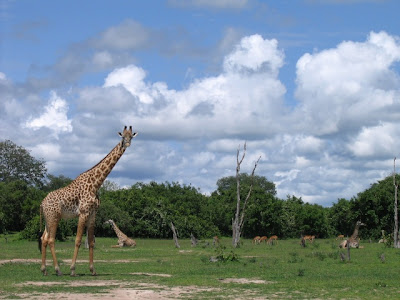 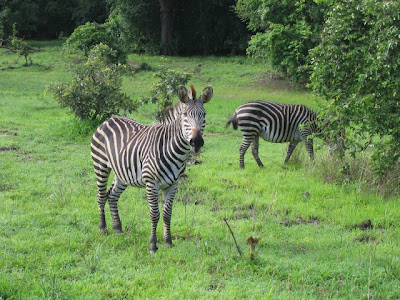 The highlight, just as we were giving up hope, was seeing two lionesses and two cubs right on the road. Even though this is supposedly the low season, the lions were being followed by loads of safari vehicles, all vying to give their customers the best view of the animals. One of the lionesses was soaking up all the attention, a decided to have a well earned rest in the middle of the road. 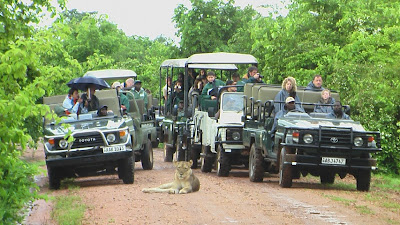 In case you’re wondering, a flatdog is a crocodile, and we saw a couple of them too.

We had planned to follow the river south-west from the park toward Lusaka, which would have been a massive shortcut, however with the on-set of the wet season, and particularly after the recent heavy rain, all the advice we were getting lead us to believe the road was impassable, even for a Camel Trophy Land Rover, and given that we were a single vehicle, abandoned the idea. This meant a four hour drive back to the main road from whence we came and then another six hours on seal of varying quality (negotiating some huge potholes).

With about 220km to go to Lusaka as the sun set, we pulled in to the only campsite for miles around. The quoted priced for a night’s camping seemed a little high, but we didn’t really have many options so decided to stop. In fact, it was the most expensive campsite we had been in since Europe, and for very basic facilities. When the manager came to see us soon after Catkin had started cooking dinner (I was reading the workshop manual about our latest noise) and told us that he would be switching the generator off in half an hour, we let him know that we thought the price for camping was far too much for a campsite that didn’t provide any lighting after 8:30pm, but when we started talking about either keeping the generator going or discounting the price, he just walked off into the night, and shortly after all went dark. Then we found that the showers were cold (the water was still warming up), and that the tap water was barely fit for washing in, let alone drinking, and we knew we were being had. Morning came, and it was time to pay up. To cut a long story short, after protracted negotiations, many sob stories, and a phone call to the police (who couldn’t come to sort it out because they didn’t have a car), we finally agreed that we would pay half the inflated price, which was still a lot for what we got. We don’t mind camping rough, and prefer to if we can find a good spot, but if we pay top dollar for a campsite we like to get what we are paying for!

On to Lusaka, and another chance for groceries, as well as having a couple of wheels balanced, with a night at another campsite surrounded by roaming zebras, impala and giraffes. From here we head to Livingstone, the mighty Victoria Falls and then to Botswana.
Posted by Gavin at 16:18 4 comments: